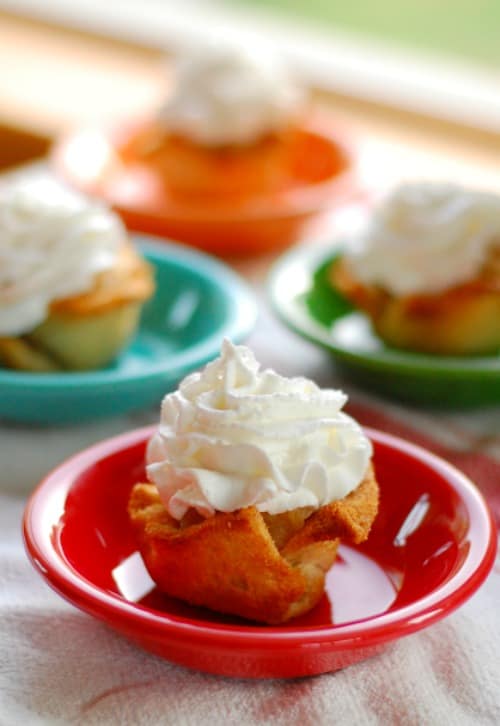 When Mary Jo was 9 until she was 13 she was in 4-H, and every Saturday she would make 8 loaves of bread for her 4-H project.  That was enough bread for toast everyday, school lunches for 3 growing kids. Lunch for her dad who took sandwiches to work.  Bread, butter and jam for dessert.  And occasionally, her mom would make applesauce pineapple toasted bread cups.  Her dad, Harold, loved desserts and I’m sure that this would have been a special treat.  Mary Jo isn’t sure where her mom got this recipe, but she speculates that she heard it on WAVN radio (the local Stillwater, MN station) sometime back in the mid 1960’s.  So here’s a recreation of this tasty, low calorie dessert. 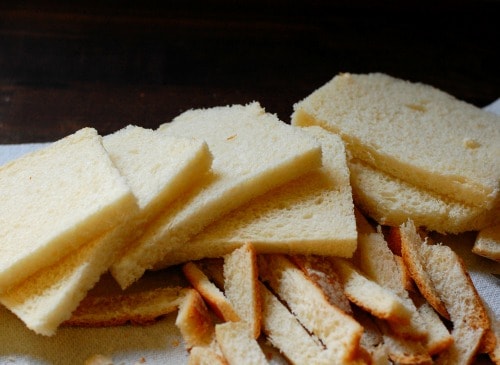 I started with a store bought cottage white bread. The bread you use should be somewhat soft so you can stuff it into the muffin pan.  Cut the crust off, then take a rolling pin and flatten the bread pieces. 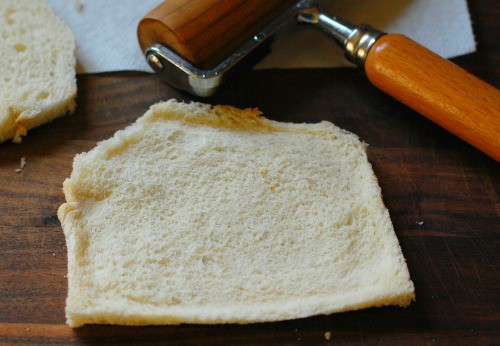 Lightly brush both sides of the bread with melted butter, then sprinkle with cinnamon sugar. 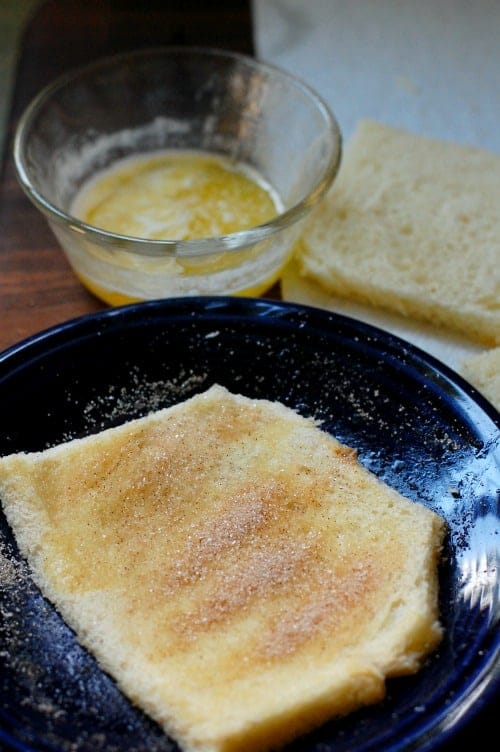 Carefully fold the bread into the muffin pan, which is lightly sprayed with cooking oil.  Fold the bread onto itself to make a fairly complete cup.  You could cut circles out of the bread to make neat little cups or just leave it rustic like I did.  When you eat this, I don’t think neatness counts!  Place in a preheated 350° oven for 15 minutes, until the bread is nicely toasted and firm.  Remove the toast cups from the pan and put on a rack to cool. 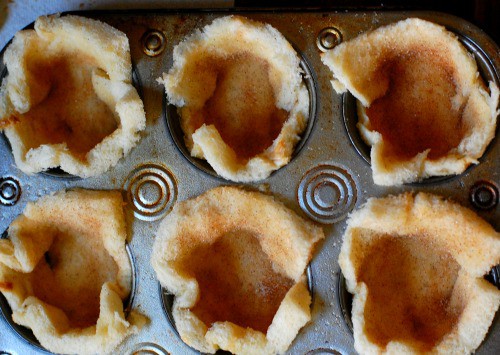 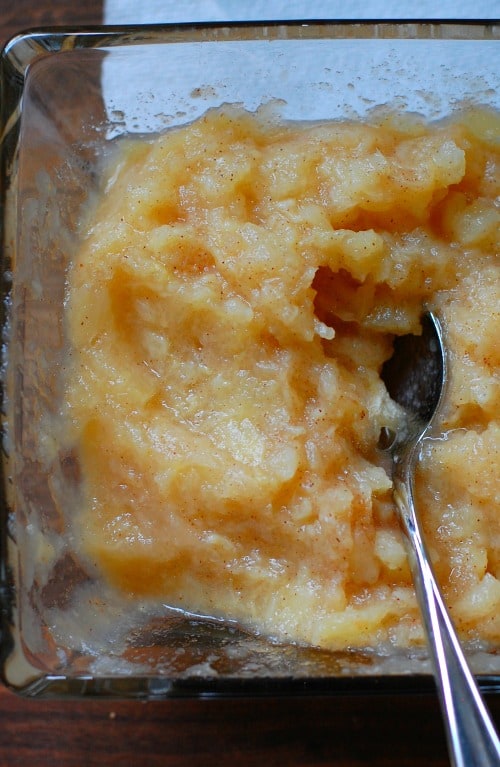 The crushed pineapple gets strained and most of the liquid is pressed out, then it is combined with the natural applesauce and a little cinnamon is mixed in. Store in the refrigerator until used. 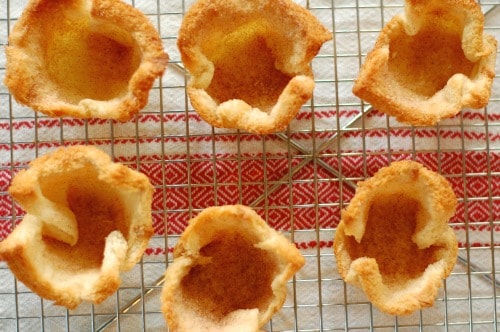 All that is left to do is fill the toasted bread cups with the fruit mixture, spray on some ReddiWip, and eat.  The ReddiWip adds about 30 calories to the dessert.  Real whipped cream would add about 200 calories. 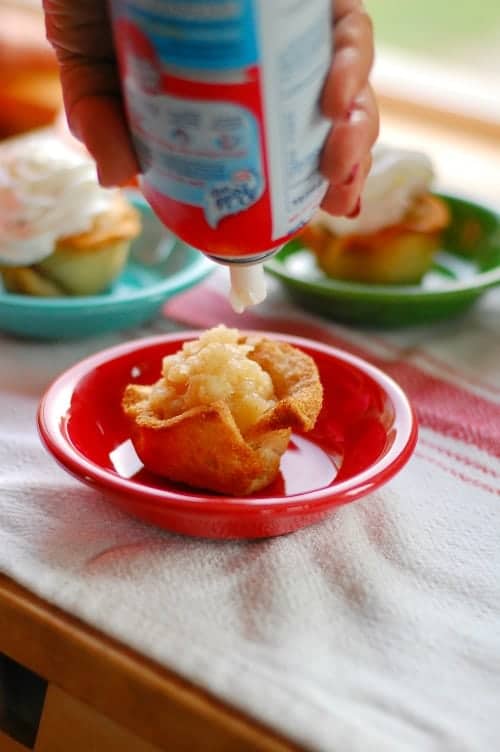 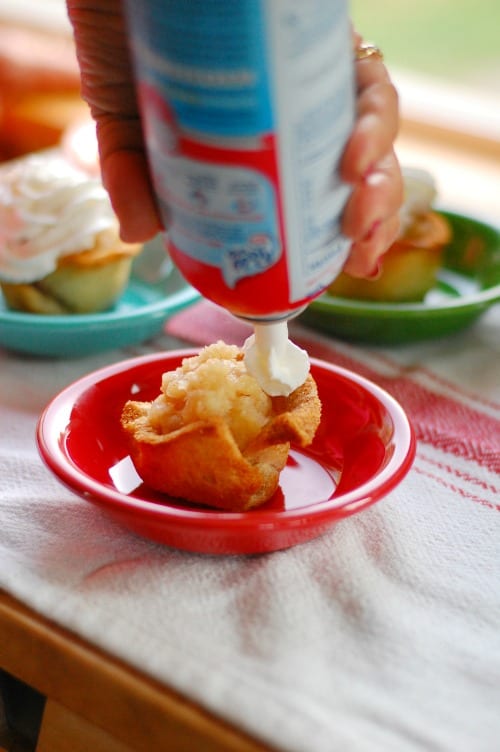 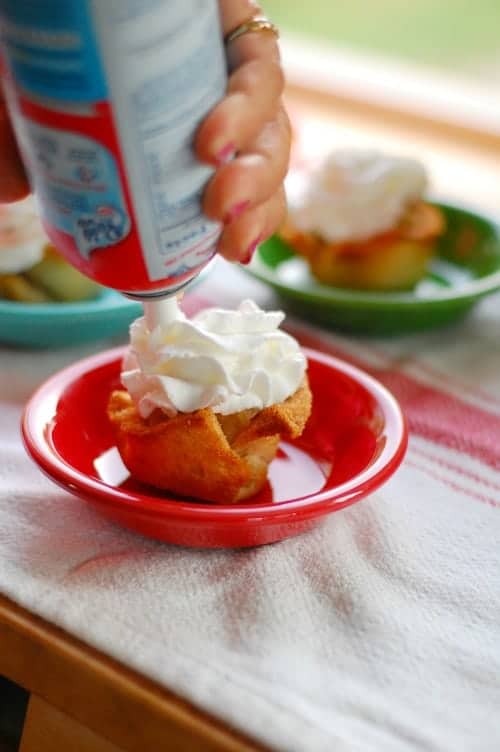 Fix up some applesauce pineapple toasted bread cups for yourself.  Hey, you could toast up some bread cups and add just about any fruit topping you could think of.  It’s also a dessert you could get your kids to help with.  Fun project and yummy to eat.

The applesauce/pineapple mixture would be enough filling for about 8 bread cups. 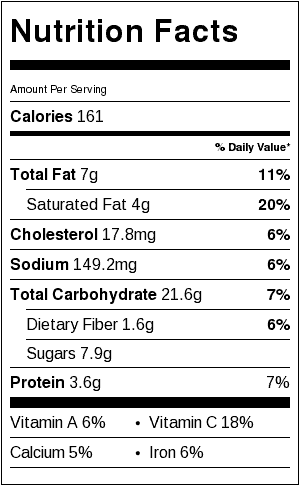